This article will cover the following:

What is a Directed Campaign

A directed campaign allows our customers to create subaffiliate and/or creative specific payouts without having to issue their affiliates new tracking links. The first campaign created is considered "unique" or "original". Any additional campaigns created for the same affiliate to the same offer (or one of its offer contracts with the same price format) are considered "directed" or "non-original."  Managing payouts at these levels in CAKE can be completed in three easy steps.

How to Create a Directed Campaign

The first step in creating a directed campaign is to add at least two of the same campaigns for an Affiliate. Additional details on how to add a campaign are found here. During the campaign creation process, the system will show the following warning if the selected Affiliate is already running the selected Offer. The Warning text says "A campaign for this affiliate and offer already exists. The campaign created will be Directed (Non-Original)." 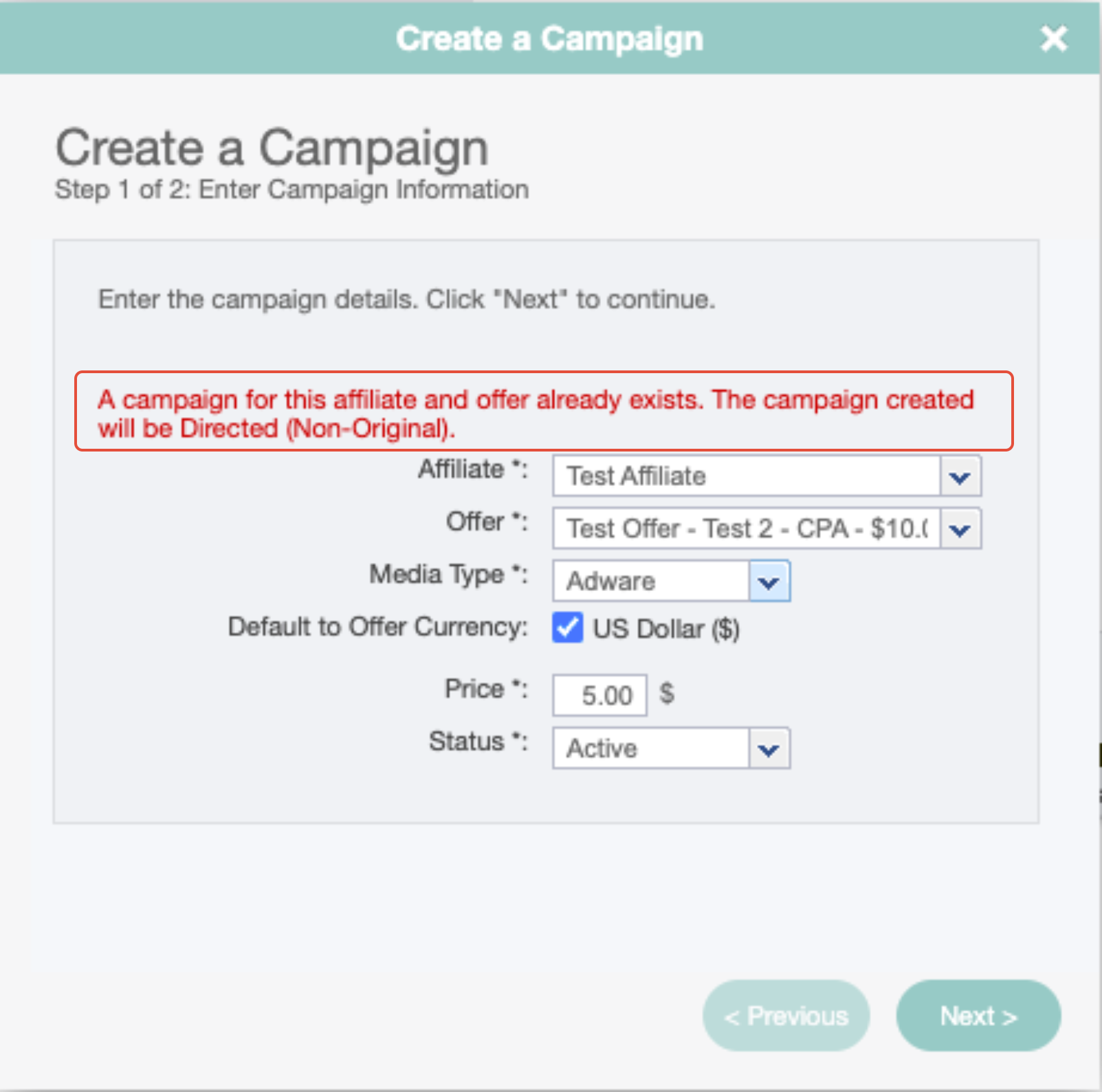 How To Add Exceptions

The second step is to set the campaign exceptions. Up until this point, the default link structure between the original and non-original campaigns are identical (they have the same a= and c= values). An exception must be set in order for the system to properly filter traffic to the Directed Campaign. You will notice on a Directed Campaign, CAKE asks for Allowed SubAffiliates and/or Creatives to be added. On the Original Campaign, CAKE asks for Blocked SubAffiliates and/or Creatives to be added. Any Allowed exceptions do not also need to be Blocked and vice versa. 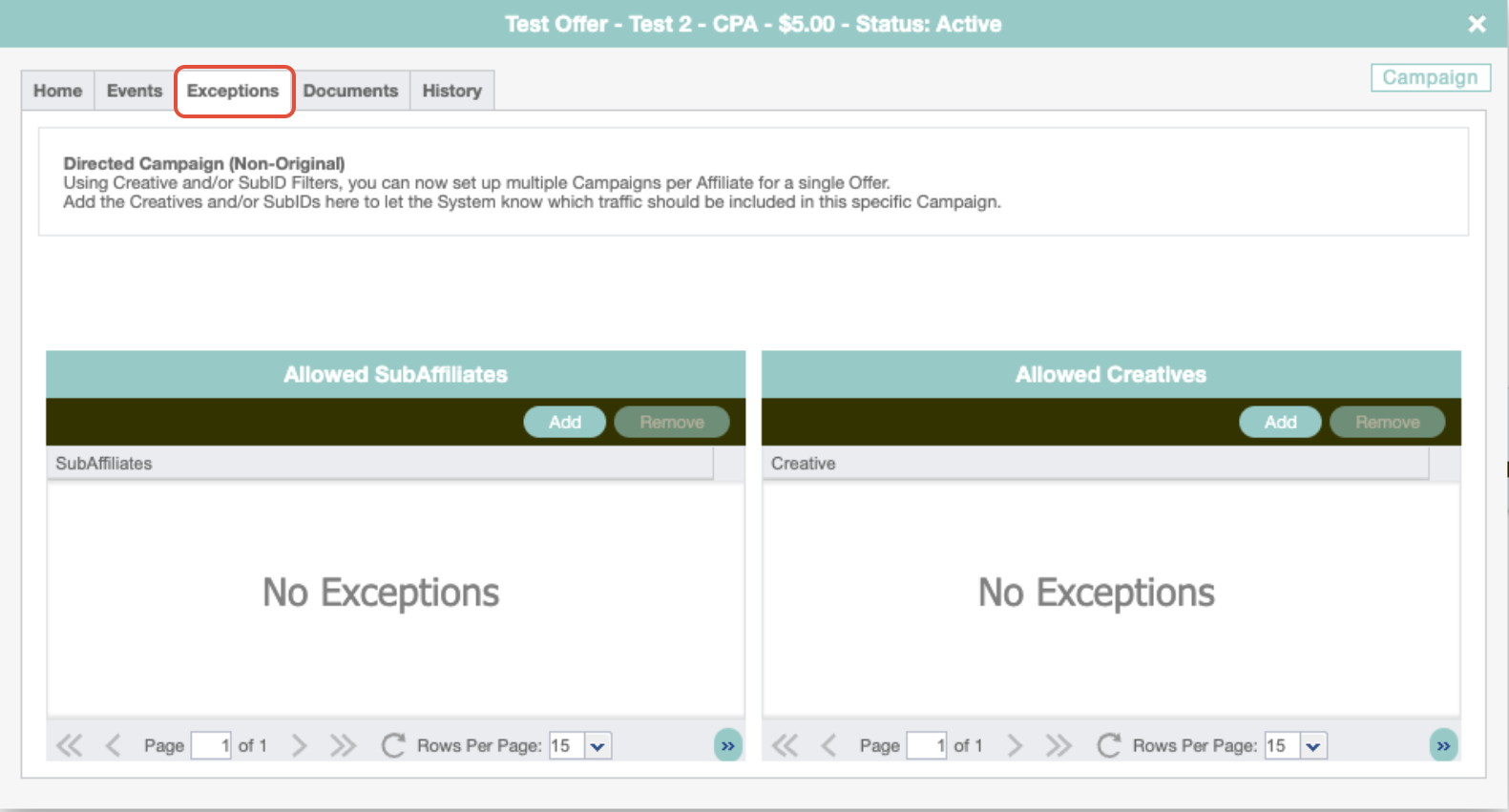 If no exception is set, traffic will only track under the original campaign.

How To Structure Affiliate Tracking Links

How to View Directed Campaigns

The simplest way to view which campaigns are original and which are directed is to use the "Directed" column in the campaigns tab of the Affiliate or Offer card. 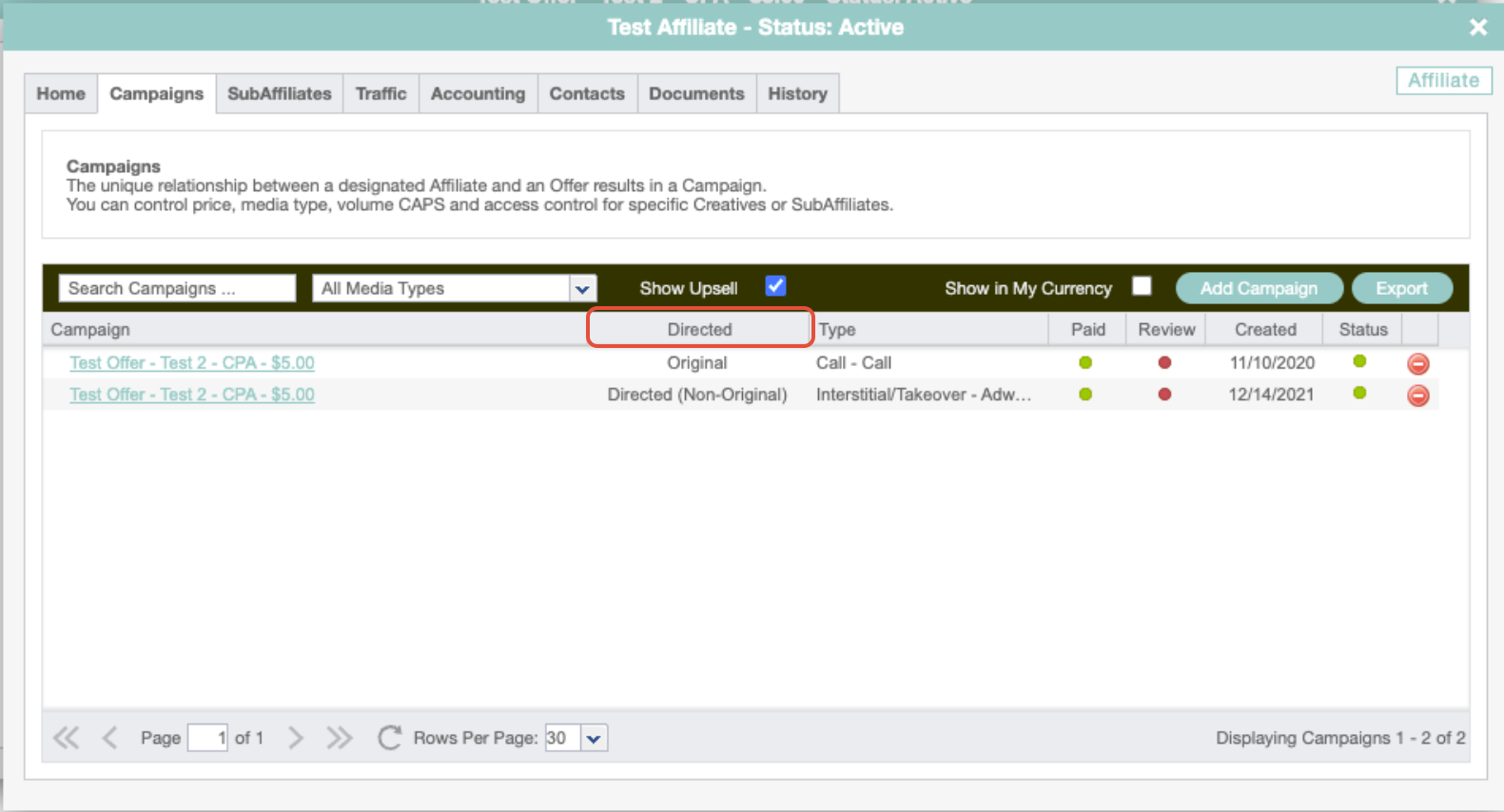 Additionally, each individual Campaign will indicate if they are Directed or Original through the field shown below: 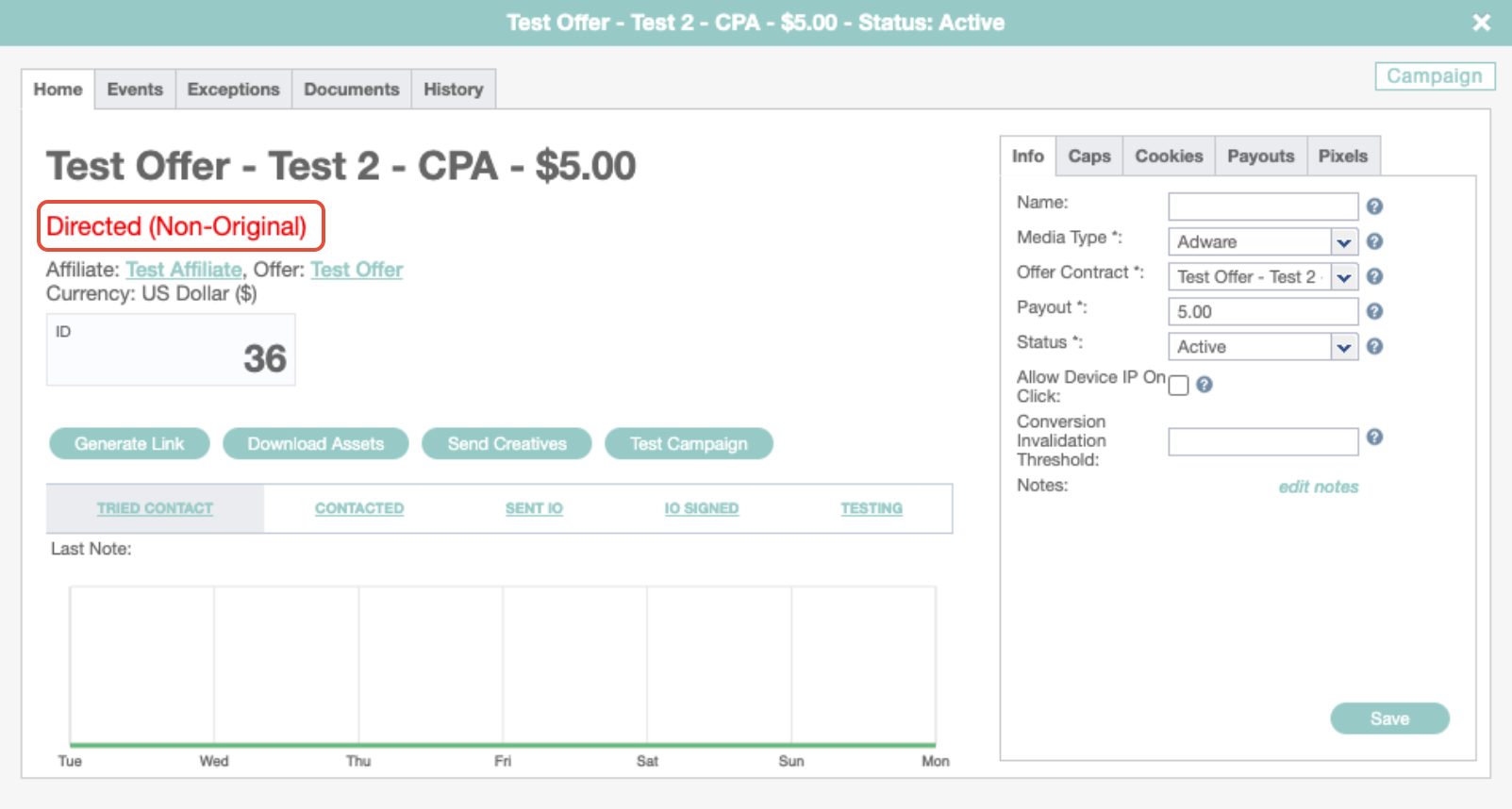 How To Manage Pixels

Directed Campaigns have an additional setting under the pixels sub tab called "Use Pixel From Original Campaign." This setting, which is enabled by default, will fire the same Affiliate pixel and/or postback that is placed on the original campaign. If the Affiliate would like to use a different pixel on the directed campaign, uncheck this setting and place it in the designated field. 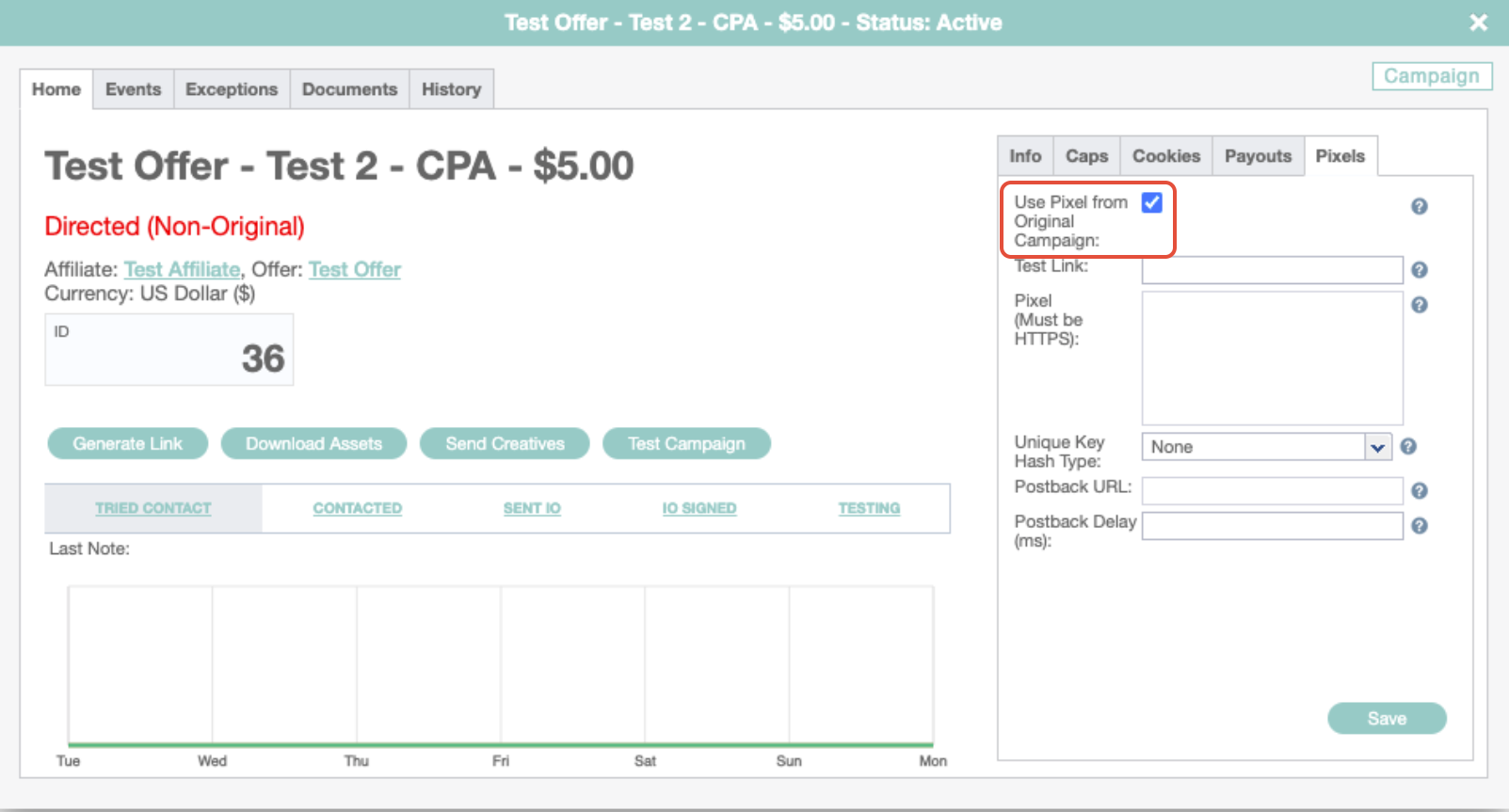 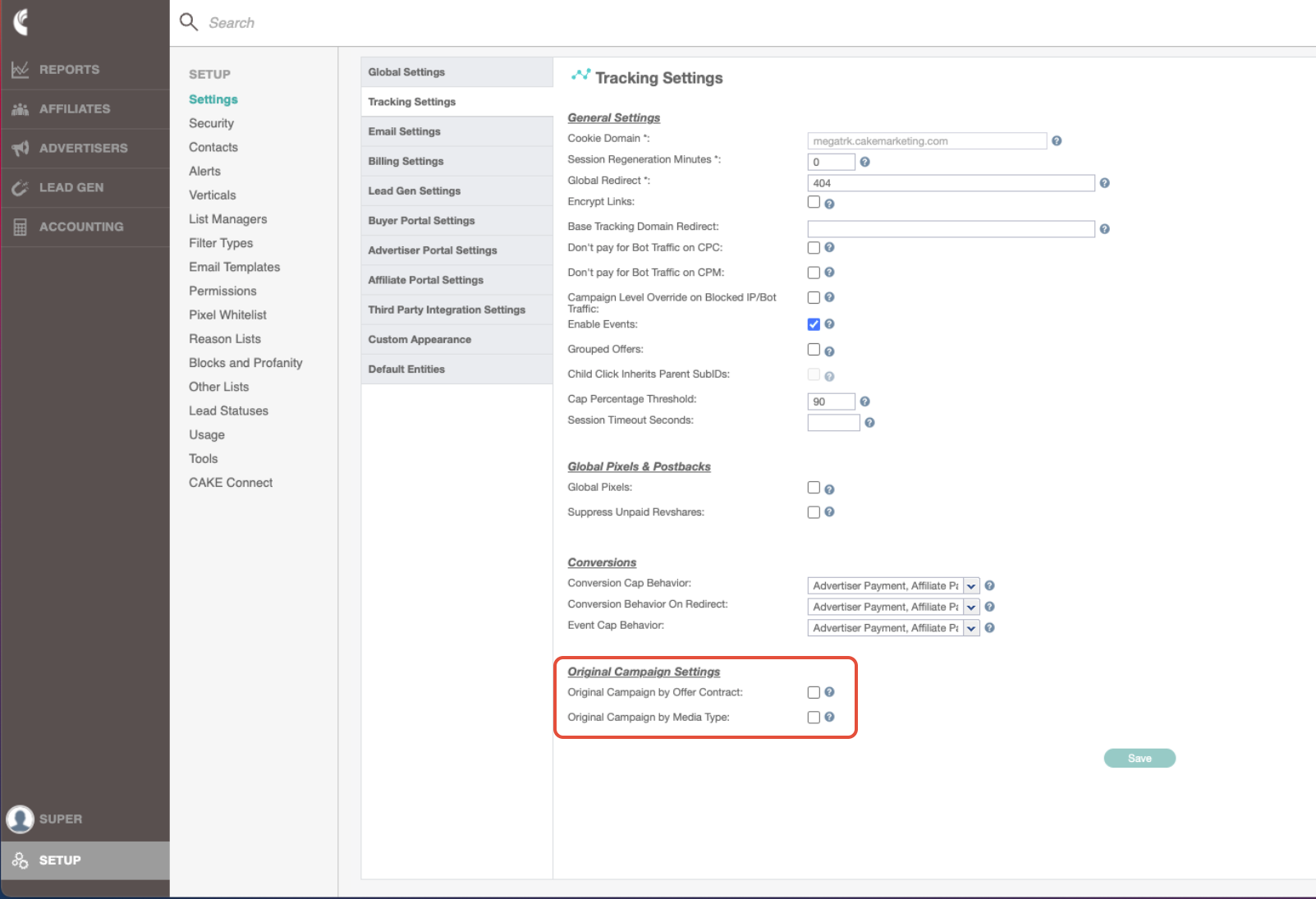 Enabling these settings applies the behaviors system-wide and cannot be adjusted on an Offer basis. We highly recommend contacting your Client Success Manager or the CAKE Support team to share your use case prior to enabling.

Original Campaign by Media Type updates the system to factor in a campaign's chosen media type. This means two

campaigns with two different media types will both be considered "original" and track separately with NO exceptions. When this setting is enabled, tracking links are generated with a new parameter (&m=). 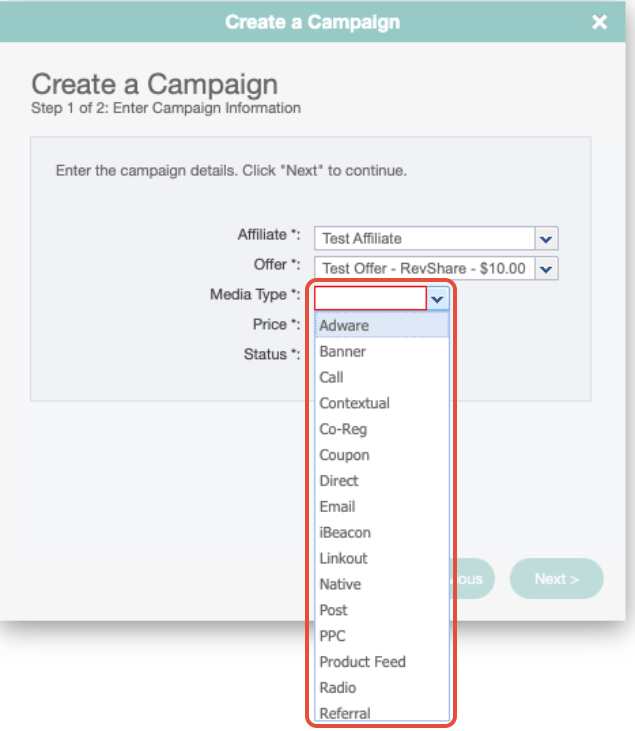 Since both Campaigns are unique, CAKE will not auto-place Affiliate tracking pixels from the first Original Campaign the way that we do with Directed Campaigns. Since we consider the 2 Campaigns unrelated, the pixel (if the same) needs to be copied from the first Campaign. This is true for the setting below as well.

Original Campaign by Offer Contract updates the system to factor in the Offer Contract associated with the campaign. This means that two campaigns with two different offer contracts of the same price format will both be considered "original" and track separately with NO exceptions. With this setting enabled, tracking links are generated with a new parameter (&oc=). 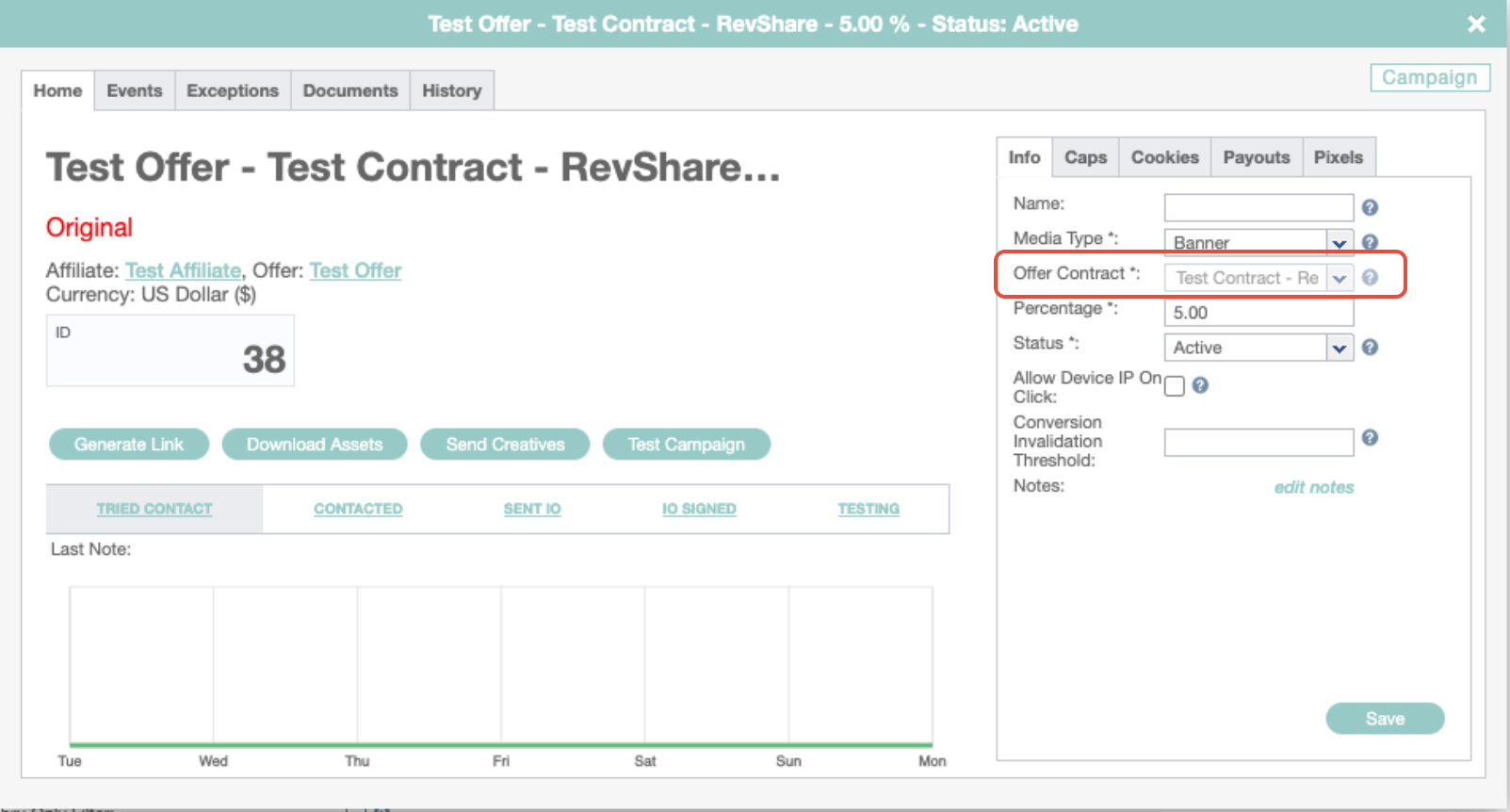 With this setting enable, the offer contract drop down on the campaign card is greyed out to show that they are permanently tied together.

If I block a subId or creative on the original, and have multiple directed campaigns, which one does it track under?