This article will cover the following:

CAKE will display different click counts depending on which report you are looking at in the CAKE Admin portal.

Affiliate Portal Reports show traffic as unique to the Affiliate, as opposed to unique to the CAKE platform. This eliminates the need for Affiliates to open the Click Report to match click to click with their external tracking system.

In our traditional Last Touch click processing logic, Affiliate A would show two clicks, causing an inflation of the click count, and a negative impact to the EPC and Conversion Rate for that Affiliate.  Moving forward, the click counts in all Affiliate-centric reports will show only unique clicks. In the Admin portal, this includes the Affiliate, Campaign, and SubAffiliate reports, which will continue to match their respective reports in the Affiliate Portal.

CAKE will deems duplicates as a “double tap” only, which is defined as the same exact click/impression request to CAKE (same Affiliate/SubAffiliate/Creative/Media Type/Price Format) within a configurable time frame called the “throw-out period.”

Ever wonder what’s working and what’s not working in your media mix?  Are you crunching excel sheets every month to find out which sources are working best in which channels?  Attribution is the process of identifying how various marketing sources are working together to influence a customer decision for a desired outcome, and then assigning value to each of these touches. CAKE can determine how much weight or influence a single touch has contributed to a conversion in a set or stream of clicks or views.

- Click cap logic set on the offer or campaign will look to the value reported here, not Total Clicks.

–At the time of the click, the user did not have any cookie for this offer AND affiliate

–When opening a Total Clicks breakout, there is a ‘Show All Clicks’ checkbox that is checked by default

–‘Show All Clicks’ lists all clicks, including duplicates and excessive redirect loops, as an individual line item

–The Total Clicks and ‘Show All Clicks’ data is only available dating back to the first day of the previous month. Anything prior is only a count of total clicks.

•All subsequent clicks are not conversions

–In the Offer report, these subsequent clicks are counted in the Total Clicks column

–In the Campaign report, the first click on each new Affiliate link is counted in the Clicks column.  All subsequent clicks are counted in Total Clicks 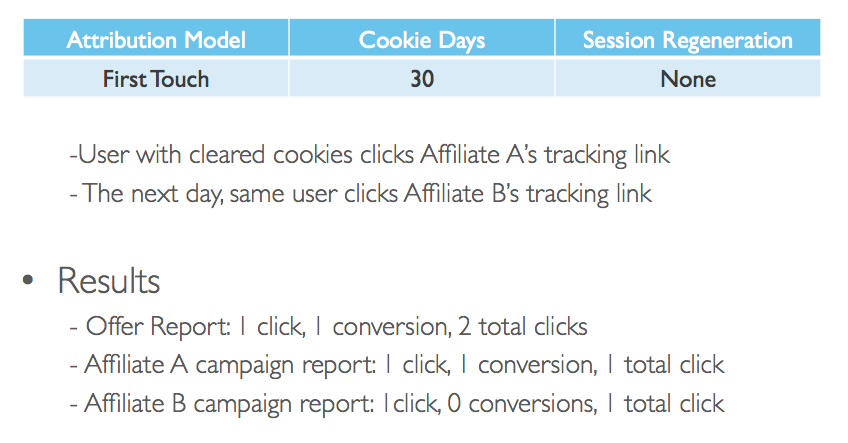 •Each new Affiliate link clicked is counted as a conversion

–In the Offer and Campaign report, these subsequent clicks will be counted in the ‘Conversions’ AND ‘Total Clicks’ column but not ‘Clicks’

–In the Offer report, only the first touch click is counted in the ‘Clicks’ column

–In the Campaign report, only the first click on each affiliate link is counted in ‘Clicks’ in the campaign report 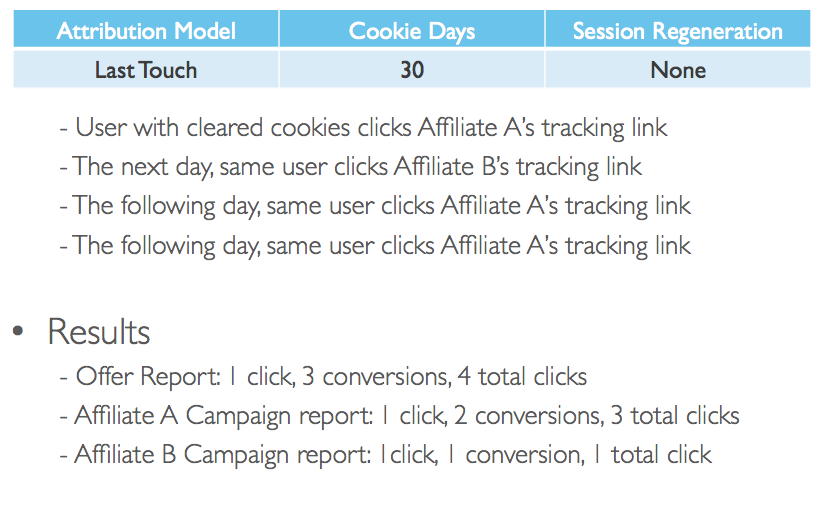 –Identifies repeat users without cookies. The most common method is IP only 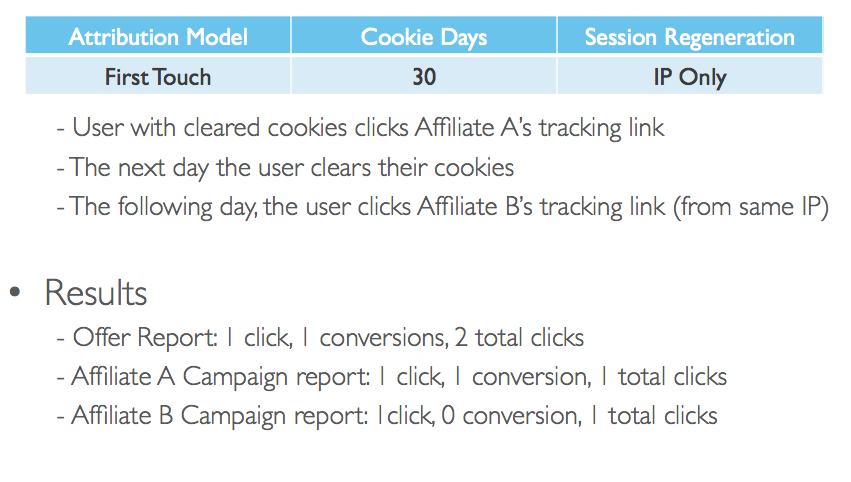 User must be in an existing session (cookied/Session Regen)

Where?  (Only in CAKE for Advertisers)

The length of time in days, hours or minutes, from the first touch where a cookie is set, that CAKE will track and credit a conversion.

Did you find it helpful? Yes No

Send feedback
Sorry we couldn't be helpful. Help us improve this article with your feedback.